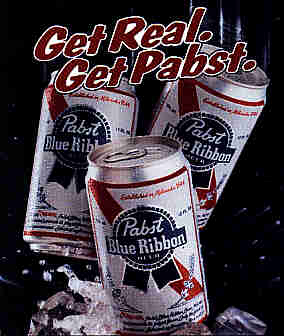 Pabst's parent company S&P (see below) decided to close this plant in December 1996 and move all production to the Stroh/G.Heileman brewery in La Crosse WI. S&P's actions are under investigation by the National Labor Relations Board...read more about it at http://www.execpc.com/~pabstbr/.

Their Falstaff division (now based in Vancouver WA) has a rather convoluted history...here's the story from :

The Falstaff beers are brewed at the Pabst plant in Milwaukee, WI. The original wood casks used to age the Ballantine I.P.A. _are there_. (Okay, it's only because no one else would buy them, and S&P are too cheap to dispose of anything usable.) Let me try and explain the arrangement of the S&P Breweries.

Falstaff is (was, until 1989 - gak) 49% available to the public on the over-the-counter stock market! [Ticker symbol: FALB] The other 51% is held by the trust of (the late) Paul Kalmanovitz. Lutz Issleib is the executor of the trust. The trust also owns the Pabst Brewing Co., the Pearl Brewing Co., and the General Brewing Co. Specialty Brwg. Co. of Wisconsin is a separate company under the S&P umbrella, but organized after the death of P. Kalmanovitz.

The S&P Breweries are = Milwaukee, WI.; San Antonio, TX.; and Tumwater, WA. S&P beers are also brewed under license by the Stroh Brwy. in Lehigh Valley, PA. & Tampa, FL. (Stroh beers are brewed under this same arrangement by S&P in Tumwater, WA. <= This may change now that Stroh owns G. Heileman.)

If you're looking for a beer investment, Falstaff isn't the way to go. But it is worth writing its corporate communications office to get a copy of its annual report (ask for the 10-K and 10-Q, also).

Anyway, Pabst products are still being brewed via their new contract office.