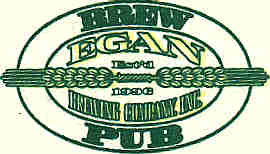 Finally! More than eight years of homebrewing, four years of unemployment, the 2½-year fiasco on Moloka`i, and the eight-week Professional Brewer Certification Program at the Siebel Institute of Technology have paid off. I brewed most of the beers listed here, so my reviews are probably even less objective than the others. (Although some people say I'm harder on my own beers. Maybe you should just drink them yourself and make up your own mind.)

Egan's was established in 1996 as a microbrewery to produce bottled beers for the Hansen's Dairy Store next door. We added a bar in 1997, and a restaurant in 1998 to become a full-blown brewpub. Then in April 2000, Nick Egan entered a partnership with the Gallagher's folks whereby the restaurant became "Gallagher's of De Pere", and the brewery went back to being a micro only. Now Hansen's is getting out of the beer business, so I don't bottle anymore, and 80% of my production is still sold over the bar at Gallagher's of De Pere, so I guess it's a lot like being a brewpub anyway.