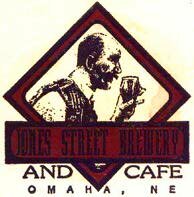 I thought there were four breweries in Omaha. Now Sharky's is closed, and we ran across Jones Street by accident while looking for another brewery that doesn't even exist! Killed six hours here waiting for my flight out of Eppley.

Directions: take Dodge Street into the downtown area. Jones Street is a few blocks south of Dodge, and the brewery is on Jones Street between 13th and 14th.