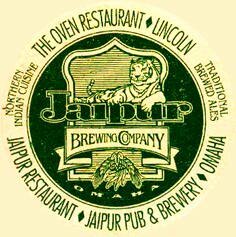 108th and Center Streets, in the Rockbrook Center. Craft beer and Indian food isn't a bad combination. They have a homemade two-barrel system here!

Directions: I-680 to the West Center Street exit. The Rockbrook Center will be right in front of you at the bottom of the ramp. Turn left (east) onto Center, right at the first light (108th), and right into the parking lot, which is enigmatically known as "Elm Street". The Jaipur is a hundred yards or so along on the right.