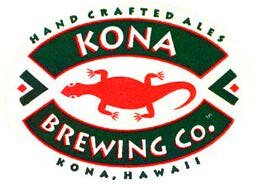 I haven't had a Kona beer since I left Hawaii...they hadn't even built their brewpub yet!