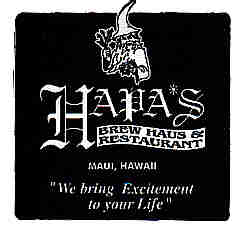 I'm not sure what their exact hours of operation are, but they had free happy-hour pizza the day I was there. Also on tap: Kona and Trade Winds guest beers. Bottled Budweiser and Bud Light in a sink full of ice.

Warning: this place gets LOUD at night.

My Opinion Of The Beers That I've Tried:
16.0 points overall