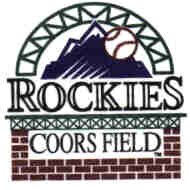 The brewery is owned by Coors and operated by Unibev, the restaurant by Aramark and the Colorado Rockies. No beer to go (or packaged), even though it's legal here.