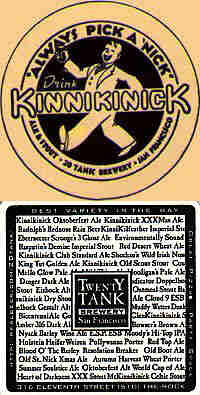 Run by the Martin brothers from Triple Rock in Berkeley CA. 20 Tank is a good place to stop if you're going to a show at Slim's or the Paradise Lounge.

Directions: 20 Tank is "South of Market", on 11th Street between Folsom and Harrison.

Bad news: the local real estate was just too lucrative for San Francisco's techno-yuppies to pass up, the landlord tripled the brewery's rent, and this landmark pub closed in the summer of 2000.