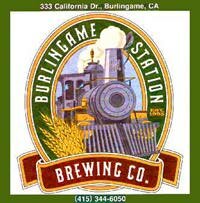 Pretty fair selection of beers and a good menu. Right across the street from the Burlingame CalTrain station, oddly enough.