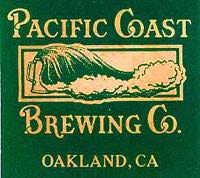 Used to be my local pub. Pretty good selection of beers, both their own and various micros and imports. They're an extract house, but for what it's worth, they won at least one medal at the GABF every year, until they were finally shut out in 1996. Great kitchen, considering what they have to work with. Tell 'em "RD" sent you...

Directions: If you're coming from San Francisco, take the Bay Bridge to 580 East to 980 "Downtown Oakland". Exit at 11th/12th Street. Turn left on 11th, right on Clay, left on 9th, left on Washington. Pacific Coast is on the right. If you're coming from the South Bay, take 880 North all the way to Oakland. Exit at Broadway, but don't turn at the traffic light. Go one more block and turn right on Washington. Pacific Coast will be about four blocks along on the right.

Don Gortemiller passes along this historical list of PCB's accolades: