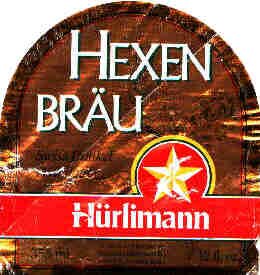 Scheduled to be closed in 1997, which doesn't sit too well with some Swiss beer-lovers like :

It's cool you can find Swiss beers in the USA, but I don't like Huerlimann. The "Cardinal" brewery in Freiburg belongs to the "Feldschloesschen-Huerlimann-Holding". They had problems with the holding. (I'll never drink "Feldschloesschen" or "Huerlimann" again :-(

Don't Cardinal or maybe Eichhof exist in the States? They brew better beer! Cardinal also belongs to the Holding, but if we don't drink Cardinal, they close the brewery. I HATE Feldschloesschen. The holding also controls over 70% of the Swiss "Getraenkemarkt". If you drink Pepsi here, it's Feldschloesschen. If you drink Schweppes, it's also Feldschloesschen. If you drink BUD or TUBORG -> Feldschloesschen!!! These two beers you can buy here are both brewed in Switzerland under license. But if you drink Coca Cola instead of Pepsi, (Coca-Cola isn't distributed by the FHH), The Holding will lose money and it would close the brewery here. Perhaps we should give the Cardinal Brewery up and build a new one that belongs to nobody! But the Brewery is part of the history of Freiburg, I wouldn't be that simple. Eichhof belongs to nobody for the moment. If Cardinal closes, I'll drink Eichhof. The bottle-filler-departement will be closed if they don't find partners in the next two month. I hope it won't happen!

And by some miracle, it didn't happen! Hürlimann is alive and well in Zürich today.

Feldschlösschen-Hürlimann-Gruppe was sold to Carlsberg in November 2000.